Hunting, fishing, camping, hiking, mountain climbing, kayaking and many other outdoor activities are a lot of fun when you venture out into the wilderness alone, but they can be even more enjoyable when you take your friends along with you. However, communication issues can often create problems– especially if you venture into an off-the-grid part of the world that doesn’t have great cell phone service coverage. Even though the holes in cell phone maps are getting smaller by the day, the leading cell phone service provider in the United States still only covers 70% of the country according to CNET.

Two-way radios that are designed for recreational activities can substitute for cell phones in these types of situations. They come in handy when you’re out of earshot and you need to communicate with your friends. All you have to do is press a button and you can chat with your group from afar. In addition, most are waterproof and can float. NOAA weather alerts are another common feature that you’ll find in these types of walkie-talkies. These alerts will let you know if a storm or some other dangerous weather condition is on the horizon.

Here are the best waterproof radios you can buy:

The best two-way radio for fishing 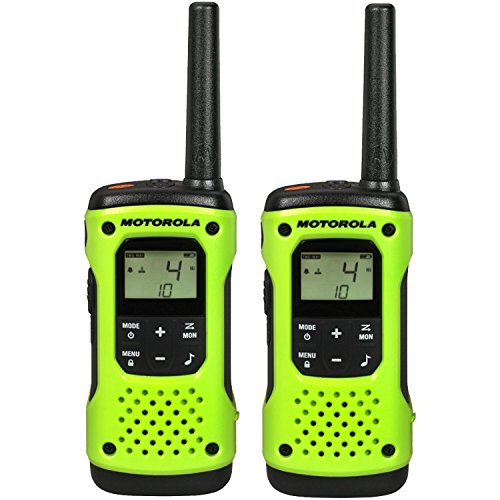 While the Motorola T600 is a versatile two-way radio that has many potential use cases, its unique features make it an excellent choice for fishing. You can use the flashlight’s red mode to avoid scaring away fish. Plus, it floats and the flashlight turns on automatically when exposed to water.

The T600’s unique flashlight is one of its best features. You can use it as an ordinary flashlight, or switch to red mode to avoid scaring off fish in the early morning or disturbing others at night. Another nice thing about the T600 is that it floats. The flashlight turns on automatically when exposed to water. 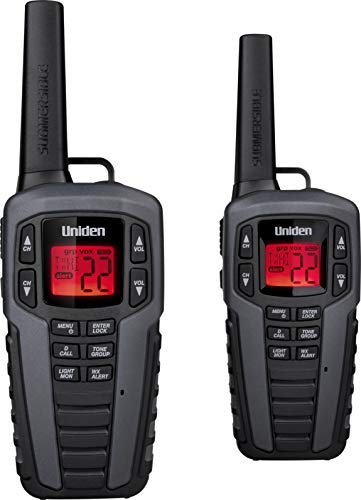 Uniden’s SX507 group mode feature is just one of this two-way radio features that’s great for camping. You can use it to send private messages to anyone in your camping party. In addition, you can use it to receive NOAA weather alerts. It’s above the industry standard in the area of battery efficiency and the fact that you can use standard batteries to charge it is another significant perk.

The Uniden SX507 lets you set up shortcuts that open private channels. These channels give the ability to send and receive transmissions to an individual without broadcasting to the whole group. This– together with the fact that you can power the SX507 with regular batteries– make it ideal for camping situations.

The most user-friendly waterproof two-way radio 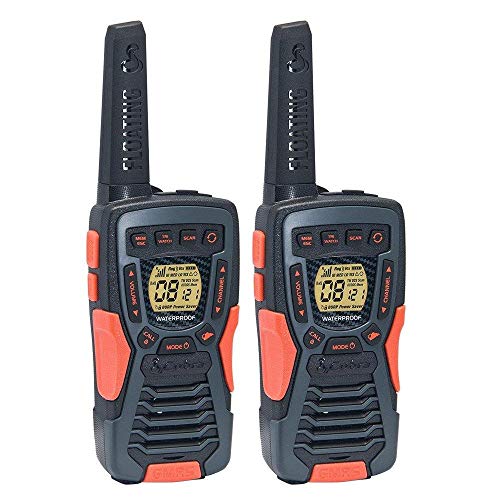 The most unique thing about Cobra’s ACXT1035R is that it automatically stores incoming messages to memory. That means that if you didn’t understand an important transmission, you can review the last 30 seconds of it to find out what you missed. This, together with its affordable price and easy-to-navigate interface, makes it one of the most user-friendly two-way radios we’ve seen.

Ease of use seems to be the Cobra ACXT1035’s main area of focus. If you lost track of a conversation or if the transmission came in garbled, you can rewind it and play it back again. No other two-way radio we’ve seen can do this. The affordable price and buoyant design add to its appeal.

The most rugged waterproof two-way radio 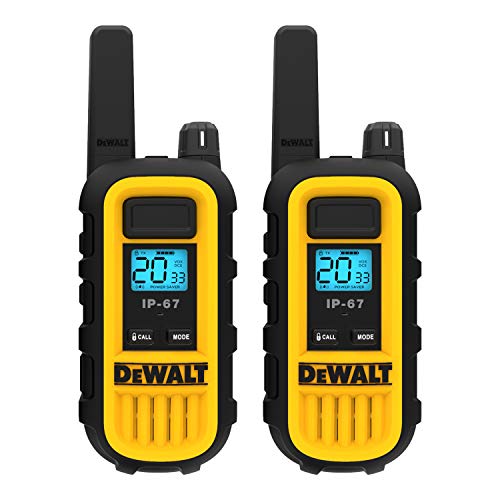 When it comes to toughness, you’ll be hard pressed to find a waterproof two-way radio that can match what the DeWalt DXFRS300 brings to the table. It’s one of the only devices of its kind that comes with a lifetime warranty. The main reason why it’s so durable is that its casing is protected by a thick layer of textured rubber.

If you had to sum up the DXFRS300 in three words or less, “tough and affordable” would do it justice. It doesn’t have a whole lot of features, but it’s one of the most rugged two-way radios you’ll find. Since DeWalt offers a lifetime warranty on it, it may be the last two-way radio you’ll ever buy. 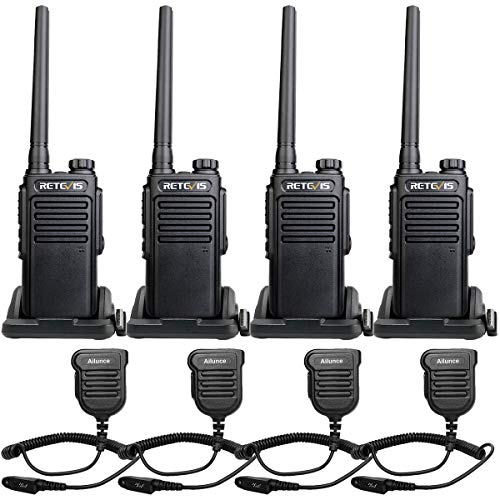 Bang for the buck is what sets the Retevis RT47 apart from the pack. The box comes with four two-way radios, each of which has its own professional-looking speaker mic. You also get four charging stations, four power adapters, four USB cables and four belt clips. Thanks to its sturdy clip design and reinforced antenna, the RT47 is tougher than most other two-way radios you’ll run into.

When it comes to pure value, you will be hard pressed to find a better deal than what Retevis offers with its RT47 combo kit. You’ll find not just two but four two-way radios in the box and each unit comes with its own professional-looking speaker mic and charging station.

Not all waterproof two-way radios can float. If you intend to use your device for fishing or some other activity that involves bodies of water, you may want to make sure that yours can. Otherwise, there won’t be much you’ll be able to do iif an accident happens and your walkie-talkie goes overboard.

If you intend to use your waterproof two-way radio for outdoor activities, battery performance is one of the first points you should consider. More hours of use time means that you won’t have to worry about running low on power when you’re in a park or some other similar place where you don’t have instant access to electrical outlets.

NOAA stands for National Oceanic and Atmospheric Administration. The agency operates radio stations located all over the country. These stations send out alerts and other weather information. If your walkie-talkie can pick up these alerts, you’ll have more time to prepare for storms and other dangerous weather conditions.

Almost all waterproof two-way radios are equipped with some kind of flashlight feature. Brightness varies, so be sure to check the flashlight’s lumen rating if available before you buy.

In general, waterproof two-way radios that fall into the $100 price range tend to be a bit tougher compared to their slightly more budget-friendly counterparts. Since they tend to have more wattage, the sound quality is often better as well.

Q: What’s the difference between analog and digital two-way radios?
A: Digital two-way radios are far more consistent in terms of signal clarity. This isn’t the case with analog two-way radios. The farther two handsets are away from each other, the more static their transmissions will contain. Backwards compatibility is the only reason why two-way radio manufacturers are still supporting analog. Modern two-way radios that can be used in analog mode also have digital capabilities.

Q: Are waterproof two-way radios resistant to salt water?
A: Yes, but you should definitely perform maintenance on your two-way radio if you happen to drop it into salt water or if it gets exposed to ocean spray. Check all the battery contacts for signs of corrosion and wipe them down with WD-40 or some other similar type of grease. You may also want to remove your two-ways knobs and inspect the insides of those as well.

Q: What kinds of obstacles can reduce the range of a two-way radio?
A: The earth itself is the biggest obstacle that will reduce your range. Two-way radio handsets can only communicate in a straight line. As a result, if the person at the other end of the line is located somewhere over the horizon, you probably won’t be able to establish communications.