Many different types of accidents can happen while boating, sailing or engaging in other similar types of maritime activities. Head injuries are especially common, as are slips and falls. Some accidents involving collisions even result in lost limbs. Many injuries and casualties involve professional mariners, but recreational sailors face dangers as well. According to the Insurance Information Institute, 1087 died from passenger ship disasters in 2017.

The sad thing is that many maritime accidents and fatalities could have been prevented. Communication gear is key because it allows you to exchange information with nearby ships and signal for help from the United States Coast Guard and other search-and-rescue resources. The Coast Guard’s Guide to Federal Requirements for Recreational Boats strongly recommends that all sailors carry a VHF radio with DSC capabilities. This guide stacks up five different kinds of DSC-equipped VHF radios against each other and compares their features and specifications. Keep reading to learn more.

Here are the best handheld VHF radios you can buy:

The best handheld VHF radio with GPS and DSC capabilities

If you don’t have a lot of room on your vessel for equipment, you may not want to install an entire instrument panel. The Standard Horizon HX890 saves space because it packs a large number of useful features into its small, portable form factor.

The Standard Horizon HX890 is one of the most versatile VHF radios on the market, thanks to the fact that it supports both GPS and digital calling. Another nice thing about it is its sturdy, durable form factor. We’ve yet to see a handheld VHF radio that’s tough enough to withstand the rigors of the US military’s MIL-STD-810F standard. 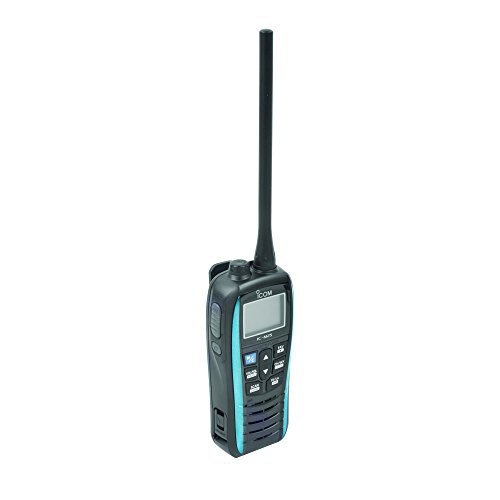 Just about every handheld VHF radio on the market floats, but the Icom M25 goes one step further. As soon as it makes contact with water, its strobe light starts flashing automatically. This– together with its reasonable cost, USB charging option and IPX7 waterproof rating– makes it ideal for fishing and other similar activities involving boats. Rated at five watts, it’s surprisingly powerful given its sticker price.

These days, just about every handheld VHF radio is buoyant. The Icom M25 floats too, but it also emits a flashing light when exposed to water. This– combined with its reasonable price tag and convenient USB charging port– make the M25 a sensible choice if you’re into fishing or other similar recreational activities that involve boating.

The best low-cost handheld VHF radio for the money

The best thing about the Uniden Atlantis 155 is its extremely low price. Most competing VHF handhelds cost twice as much or more. The reason why it’s so inexpensive is probably because its transmitter can only put out three watts. High-end handheld VHF radios are twice as powerful. The battery performance is somewhat on the low end of the spectrum, as well. Those caveats aside, its other features are competitive.

Value is the Uniden Atlantis 155’s main attraction. It’s not the fanciest handheld VHF radio on the market, but it is one of the least expensive ones. Even though it doesn’t cost much, it offers impressive water resistance, two different backlight modes, a NOAA weather alert capabilities and several other great features.

The most user-friendly handheld VHF radio 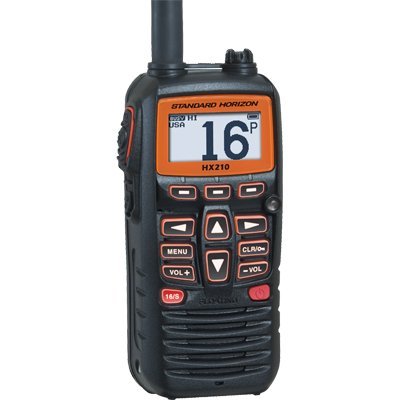 The Standard Horizon HX210 is a beginner-oriented handheld VHF radio that’s aimed at casual mariners. All the standard features are present and accounted for, but the lack of GPS functionality and digital calling might be an issue for some. On the plus side, the HX210 is surprisingly powerful and you can operate it for a full 15 hours between recharges. Once you do run out of batteries, the rapid charging feature will get your HX210 up and running again in less than three hours. The built-in FM radio antenna is a nice additional perk.

The Standard Horizon HX210 has many features that appeal to casual mariners, like a built-in FM radio antenna, three-hour rapid charging and two different color options. Standard Horizon’s patented E2O (Easy to Operate) interface further increases the HX210’s user friendliness. The price point is competitive, as well. Downsides include lack of support for DSC and GPS.

The handheld VHF radio with the most sound features 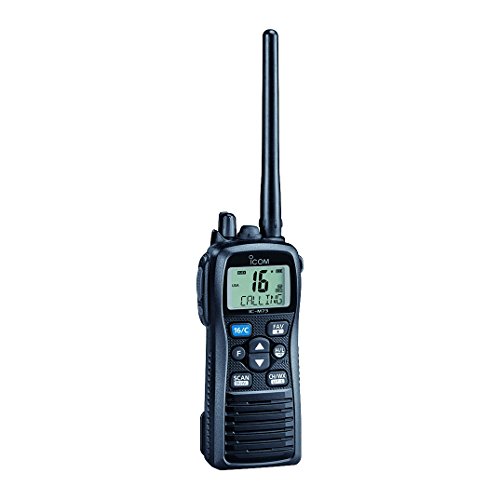 The Icom IC-M73 seems to have been designed with sound features in mind. Active noise cancellation can be applied to both transmissions and incoming messages. In addition, there’s a bass boost mode that can also be applied to TXes and RXes. Plus, all audio is recorded automatically, so that you can rewind as 60 seconds back in time if you miss something.

Audio enhancement appears to be the core theme of the Icom IC-M73’s feature set. Its active noise filter can be applied to both incoming and outgoing signals and so can its bass booster. In addition, it automatically buffers 60 seconds’ worth of audio so that you can rewind when needed to repeat misunderstood transmissions.

Some high-end VHF radios come with built-in GPS antennas. This feature can be extremely handy for navigation and may even save your life if you find yourself in an emergency situation, since it lets you send your position to search and rescue personnel.

Virtually all new fixed mount VHF radios now support digital calling. However, handheld VHF radios haven’t quite caught up in this department. If you want to be able to send and receive digital messages to nearby vessels, look for a VHF radio with DSC. You can also query the positions of nearby vessels via DSC and this can help with making smart navigational decisions.

Budget VHF radios typically put out three watts, while mid-range and high-end ones are capable of outputting as many as six watts. More wattage typically means better range.

You’ll get as little as ten or as many as 16 hours of usage time, depending on your handheld VHF radio’s transmission power and power management capabilities. If you’re a casual mariner, battery performance may not be that big of a priority. However, those who are out on the water all day may want to take this factor into consideration.

Most VHF radios that have a noise cancellation capability can filter out noise from both incoming and outgoing transmissions. You can typically adjust how much filtration you want to apply by adjusting the settings. If you apply too much noise filtration, you may not be able to hear weak signals.

Handheld VHFs that support rapid charging are generally more convenient than those that don’t. Rapid charging typically means that you can go from zero to 100 percent charged in about three hours. Again, the utility of this feature will be determined by how often you use your vessel.

This nice-to-have feature lets you tune into talk radio programs or listen to music while you’re out on the water. Even though standard FM radios don’t typically take up much space, FM functionality is still a nice-to-have feature that can reduce the number of devices that you’ll need to remember to take with you when you’re ready to hit the water.

Some handheld VHF radio displays are bigger and brighter than others. If you often find yourself squinting at electronic displays, you may want to check the specifications of your prospective VHF radio’s display before you buy.

Features that come standard on basic handheld VHF radios include water resistance, NOAA alerts and display backlighting. However, the battery life and wattage is typically low compared to mid-range and high-end VHF handhelds. Prices start at $70.

If you’re willing to spend about $150, you’ll get better waterproofing and more power. However, you won’t find DSC and GPS at this price tier.

Deluxe VHF handhelds support GPS and DSC. Battery life is typically better as well, and transmission power can go all the way up to six watts. That’s more than twice the power you’ll get with some budget VHF radios, some of which only output three watts.

Q: I just want to do some casual fishing. Is a handheld VHF radio all I need?
A: The United States Coast Guard recommends that all mariners should keep at least one VHF radio with them at all times. If you bring an EPIRB (Emergency Position Indicating Radio Beacon) with you, you’ll be even safer. You may also want to consider getting a backup VHF radio as a failsafe, so that you’ll still be able to communicate if your main VHF breaks.

Q: Are there any regulations that govern the use of VHF radio channels?
A: Yes. Channel 16 is reserved for emergencies, so you aren’t supposed to use it for anything else other than that. Similarly, channel 13 is reserved for ship-to-ship navigational communications. Channel 70 is only to be used for DSC transmissions.

Q: What is the procedure for contacting a vessel via VHF?
A: Typically, channel 9 is used for establishing communications. Identify your vessel and state the channel you intend to use for further conversations. According to the Coast Guard, it is acceptable to use channel 13 to get a vessel’s attention if they don’t respond to initial attempts to establish communication.