Outdoor adventures are fun, but accidents and other chaotic events can have deadly consequences– even with today’s technology on our side. Mariners are particularly familiar with the unpredictable nature of the ocean. Rogue waves can cause instant chaos, even when the weather is clear. Mountain climbers face their own particular set of unique perils. According to Outside Magazine, accident statistics indicate that the average climber has a 1-in-2,000 chance of ending up in the emergency department every year.

When disaster strikes, a PLB (Personal Locator Beacon) can serve as your “get out of jail free” card. With the press of a button, your PLB will obtain your GPS coordinates and start sending out distress signals. First-generation PLBs that came out in the 80s could only provide a rough estimation of where you might be within a 12-mile radius. Thankfully, today’s PLBs are far more precise. Some can even pinpoint your exact location down to a single meter.

Here are the best personal locator beacons (PLBs) you can buy:

The best PLB for backpacking and hiking 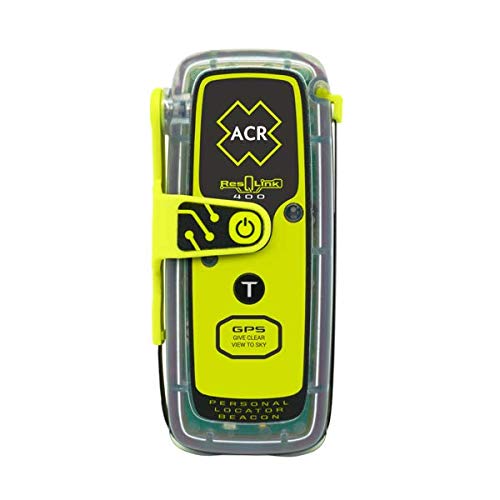 Quick, accurate and reasonably priced, the ACR ResQLink 400 is an excellent PLB for backpacking, hiking and other similar outdoor adventures. The fact that it’s Galileo compatible may help in a situation where your rescuers need very precise GPS data to find you. Since it’s buoyant and has robust waterproofing features, it can be used for canoeing and water rafting, too.

The ACR ResQLink 400 supports Galileo, which is a new GPS network that provides one-meter accuracy. It also supports standard GPS. This makes it an excellent choice for backpacking and camping in off-the-grid locations. Another nice thing about it is that it exceeds the waterproofing standards put forth by the Radio Technical Commission for Maritime Services. 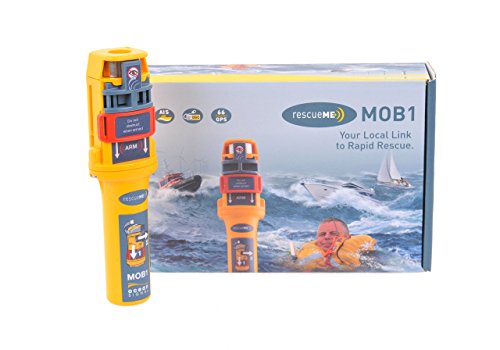 Ocean Signal’s rescueME MOB1 combines the features of a PLB with those of a MOB device. You can use it to send out a preformatted message to your boat’s alarm system. This is helpful for alerting the entire crew that there’s an emergency. When used as a PLB, it can send out GPS signals for up to 24 hours. The seven-year maintenance period is another significant perk.

Ocean Signal’s rescueME MOB1 is a hybrid PLB/MOB device. That means that it’s just as useful in MOB (Man Overboard) situations as it is for sending out a locator beacon if you get lost or encounter some other kind of disaster while at sea or during a hiking trip.

The best PLB with a display feature 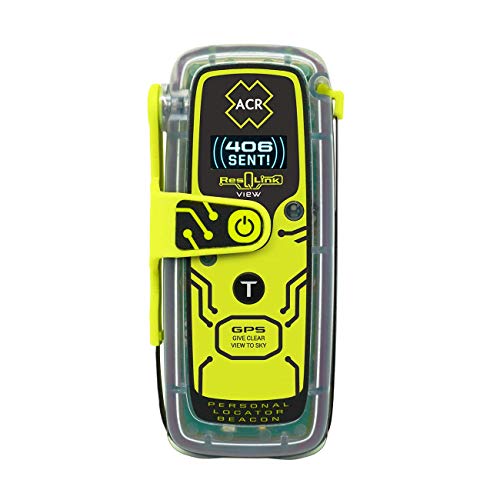 Most PLBs don’t come with a display and this makes them somewhat tricky to use, especially when self-testing. That’s where the ACR ResQLink View comes in. Its interface walks you through the self-testing procedure so that you don’t have to refer to a manual. If you ever have to use it, you can use the display to check your coordinates and monitor the remaining battery power.

As its name suggests, the ACR ResQLink View’s main benefit is its display. With a glance, you can look at your GPS coordinates or check the battery power. This can provide essential data in the event of a disaster that causes you to activate the device. The screen also comes in handy when self-testing.

The best PLB for sailing and fishing 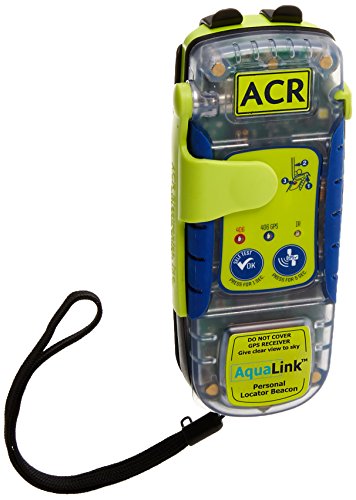 The ACR AquaLink 350B PLB doesn’t only meet the RCTM’s waterproof standards for beacons, it exceeds them. In addition, its built-in buoyancy system will help you retrieve the device if you happen to drop it in the water. All this– in combination with its simple interface and bright strobe light feature– make it an excellent option for fishing, sailing and other similar activities.

The ACR AquaLink 350B PLB seems to be designed to appeal to fishermen, yacht operators and canoers. The fact that it’s buoyant means that you can simply turn around and pull it out of the water if it happens to fall in by accident. It also exceeds the RTCM’s waterproofing requirements. 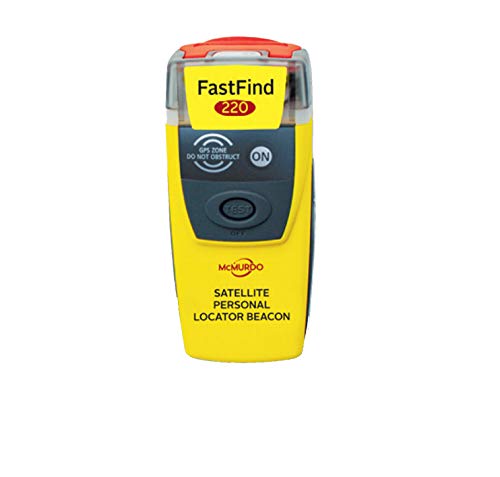 The McMurdo FAST FIND 220 is a compact, inexpensive PLB that has better features than you might expect. Chief among these is its Galileo-compatible GPS unit. Galileo is a new GPS network that came out in 2016. It’s multiple times more precise than standard GPS.

Even though McMurdo’s FAST FIND 220 is notably less expensive than many competing PLBs, it brings a lot to the table when it comes to features. Since it can connect to the new Galileo satellite network, it’s significantly more accurate than PLBs that can only interface with the standard GPS satellites.

The Radio Technical Commission for Maritime Services is the international non-profit regulator organization that sets the standards for all kinds of different nautical equipment. Some PLB manufacturers seek only to meet its waterproofing requirements, while others offer even better waterproofing features.

Expect to start thinking about replacing your PLB’s battery after about five years. Depending on the battery type, you may be able to wait as long as six or even seven years. To replace a battery, you usually have to take your PLB to an approved retailer for service. Some PLBs feature user-replaceable batteries, though.

Galileo is a new GPS satellite network that went live in 2016. Not all PLBs support it yet. PLBs that only support standard GPS offer 100-meter accuracy. That’s still very precise compared to non-GPS PLBs. However, Galileo-compatible PLBs can detect your exact position down to the meter.

Most PLBs are about five inches long and two inches wide. More compact PLBs are available, though. Size and weight might be a factor if you’re a backpacker, but the small differences among the different PLB brands probably won’t matter to fishermen and sailors.

Some PLBs come with a variety of different skins, which you can use to change the way your PLB looks. The skins work just like mobile phone skins. You can snap them on or take them off with your fingers.

MOB stands for Man Overboard. Most mariners use AIS when addressing MOB situations because it works faster than GPS and interfaces with a wider range of communication devices. If you use a VHF system to communicate with your crew, you may want to get a PLB that supports Digital Selective Calling (DSC). Some PLBs that support DSC can automatically trigger VHF alerts when they make contact with water.

PLBs with displays are convenient because they’re easier to use. You don’t need to use a manual to perform self-testing. Once activated, you can check the status of the battery just by looking at the display.

Are you part of an organization that requires frequent PLB self-testing? Some PLBs have higher self-test limits than others. Check the specifications before you commit if you need to self-test your PLB on a regular basis.

Low-cost PLBs typically aren’t as rugged as mid-range and high-end PLBs are. They may not be as buoyant or as water resistant, either. Prices start at about $200.

At the $300 price range, you’ll start to see AIS integration and other niche features that add versatility. Some mid-range PLBs work with the Galileo satellite network and can be used as MOB devices.

The most cutting edge PLBs come with built-in displays and other premium features like extended battery life, Galileo network support and better-than-average waterproofing. You can expect to pay about $350 for a high-end PLB device.

Q: What’s the difference between a PLB (Personal Locator Beacon) and an EPIRB (Emergency Position Indicating Radio Beacon)?
A: The main difference is battery life. Most EPIRBs will transmit distress signals for about two and a half days before their batteries give out. You’ll get less operational time (usually about 24 hours) out of a PLB. In addition, buoyancy is a standard EPIRB feature. Most– but not all– PLBs will float in water. Cost and weight are some other key differences. EPIRBs tend to be heavier and more expensive than PLBs.

Q: What’s the difference between 406MHz PLBs and 121.5MHz PLBs?
A: 121.5MHz is the analog frequency that legacy PLBs used to use to obtain positioning information. New PLBs use the faster and far more accurate digital 406MHz frequency to communicate with satellites. Most new PLBs still support 121.MHz, but that’s mainly so that they’ll be able to communicate with older SAR equipment should the need arise.

Q: When is it appropriate to activate my PLB?
A: You should think of your PLB as a last ditch effort to call for help. Do not activate your PLB unless you’re in a dire situation and you’re completely out of options.