According to the Insurance Information Institute, Marine accidents killed 1,163 people and caused $197 million worth of losses in 2017. One way to avoid accidents is by practicing good communication habits while on the water. VHF radios can play a big role in communications. If you have a reliable one, it can help you avoid dangerous situations at sea. However, this fact remains: your VHF radio is only as good as its antenna. Even if you recently bought the latest, most cutting-edge VHF radio system, you won’t be able to get much out of it if your antenna is damaged, improperly mounted or not working correctly.

Fortunately, fixing the antenna problem is easy to do. Most VHF marine radio antennas are inexpensive and not hard to install. Some require a bit of soldering, but others come with snap-on coaxial cable connectors. There are a variety of different antenna types to choose from, ranging from eight-foot-long antennas for large vessels to four-foot-long antennas for sailboats and other smaller crafts.

Here are the best VHF marine radio antennas you can buy:

Combining a 6dB gain specification with brass and copper components, the Shakespeare 5101 Centennial is an excellent choice for casual mariners. It’s an affordable, reliable VHF marine radio antenna that will likely last a long time if you take care of it properly.

Large vessels are more stable than small ones, which allows for the effective use of high gain antennas like the Shakespeare 5101. Its internal components consist of brass and copper elements and this also allows for greater sensitivity. While multiple mounting kits are available, the fact that you have to purchase those separately is slightly disappointing.

The Shakespeare 5104 is an excellent low-gain marine radio antenna that is tailor made for sailboats and other small vessels. Sailors seem to like the fact that the coaxial cord comes out of the side of its base instead of out of the bottom of it. This design makes it much easier to install.

The most rugged VHF marine antenna for professionals

If you’ve gone through several inexpensive VHF marine antennas and you’re looking for something a little more long-lasting, the Shakespeare 5226-XT Galaxy might do the trick. It’s somewhat on the pricey side, but that’s because its surface is covered with a special weather-resistant coating. The internal components of the antenna are a notch above what you get with a typical one, as well.

If you often find yourself navigating choppy seas, you may want to give the Shakespeare 5226-XT a hard look. It’s more rugged than most VHF marine radios you’ll find because it’s coated with polyurethane. Its internal components are a cut above the competition as well, and this allows for improved sensitivity.

The most user-friendly VHF marine radio antenna for casual mariners

Not that handy with a soldering iron? The Tram 1607-HC’s snap-on connector may pique your interest. Another nice thing about this VHF marine radio antenna is that it comes with a mounting system. In other words, everything you need to install it is in the box. However, there is one notable downside to consider: the fiberglass base is sturdy enough for calm weather, but it may be a bit too flimsy to stand up in turbulent conditions. It may be all you need if you’re a casual sailor, but professionals may want an antenna that’s a bit more durable.

Ease of use is the Tram 1607-HC’s main selling point. Many VHF marine radio antennas require you to use a soldering iron during installation, but the 1607-HC’s unique snap-on connector allows for greater user friendliness. Another nice thing about the 1607-HC is its low price point. If you’re new to sailing, it’s not a bad option. 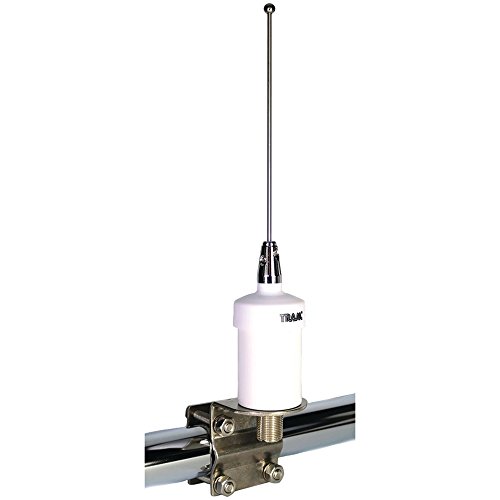 The best thing about the Tram VHF Marine Antenna is its super low cost. Despite its low price point, its features are surprisingly competitive. You may expect a small-sized antenna like this one to offer just 3dB of gain, but actually you get 6dB. That means that you can potentially get great performance out of it, depending on how you mount it. Another nice thing about this antenna is that it comes with a stainless steel mounting kit. Since the PL-259 connector comes pre-installed, you won’t have to solder it to the RG-58 coaxial cable yourself.

The Tram VHF Marine Antenna is small and inexpensive, yet it boasts an impressive 6dB gain specification. If you’re a casual sailor and all you want is a basic VHF marine antenna that works, it could be your best option. In the box you’ll also find a rust-resistant, stainless steel bracket and a RG-58 cable. The PL-259 connector comes pre-installed.

Bigger isn’t always better when it comes to antenna length. If your boat is under 24 feet long, you’re actually better off with a three to four foot antenna. As a general rule, you should avoid using antennas that are more than half the total length of your vessel.

High-dB, eight foot antennas are ideal for vessels that are at least 24 feet long, since they create a long, elliptical-shaped signal pattern. Large boats get thrown around less by waves and are more stable compared to smaller vessels. Smaller boats are constantly rocking around. This rocking motion interferes with the elliptical pattern created by high-dB antenna, so a smaller, lower dB antenna is actually more effective.

Some VHF marine radio antennas come with mounting kits, while others require you to buy one separately. There are several different kinds of mounting kits you can buy. Adjustable mounting kits let you fold down your antenna when you pass under bridges. Fixed mounting kits are sturdier, but they aren’t as convenient.

Are you good with a soldering iron? If not, you may want to go with an antenna that comes with a pre-assembled coaxial cable. Otherwise, you’ll have to solder on the PL-259 connector yourself when you install it. The main downside of pre-assembled coaxial cables is that you’re pretty much stuck with the factory length. The less cable you use, the more efficient your antenna will be. If you assemble your coaxial cable yourself, you can cut it to whatever length you need.

Some VHF marine radio antennas are coated with polyurethane. This makes them a bit more weather resistant. Another durability feature to consider is the thickness of the supplied coaxial cable that comes with the antenna. Generally, the thicker the cable, the more durable it will be. RG-58 is the standard type and it’s about 0.2 inches in diameter. RG-8/X is slightly thicker, at 0.24 inches. RG-59 is less common and it measures 0.22 inches around.

The least expensive VHF marine radio antennas start at about $30. Most antennas in this price range are under four feet in length. They are typically not as durable as mid-range and high-end antennas.

VHF marine antennas that cost $100 or more have more durability features and even better internal components than mid-range antennas. Manufacturers of premium antennas typically back up their products with multi-year warranties.

Q: How long can I expect my VHF antenna to last after I purchase it?
A: That depends on the type of materials that it’s made from, the quality of the manufacturing, how well you maintain it and a wide variety of other factors. Cheaper VHF antennas can last for about five years. Higher end ones can be used for several decades before they wear out.

Q: Are multifunction VHF antennas better than single function VHF antennas?
A: While multi-function antennas do exist, most experts recommend the use of dedicated antennas for each piece of communications equipment that you use. If you decide to go that route, be sure to give each of your antennas adequate spacing to avoid interference.