Walkie talkies were all the rage in post-WWII era America. New York Times writer Jack Gould went as far as to say that two-way radio technology would “make life both more efficient, enjoyable and in many instances downright fun.” While this prediction certainly did come true, the fact remains that there was one thing about two-way radios that certainly wasn’t fun: garbled, staticy audio. Various obstructions can block the radio signals that a two-way radio transmits. Power limitations are another factor. If the transmission doesn’t have enough power, it will degrade before it reaches its destination.

Fortunately, two-way radio technology has come a long way since the 1940s. Because the range of today’s long-range radios exceeds the thirty-mile mark, town-to-town communication is possible in perfect conditions. Today’s powerful five-watt UHF two-way radios are strong enough to send signals directly through trees, non-metallic walls and other similar obstacles. Keep reading to learn about five of the very best long-range two-way radios on the market today.

Here are the best long range two-way radios you can buy: 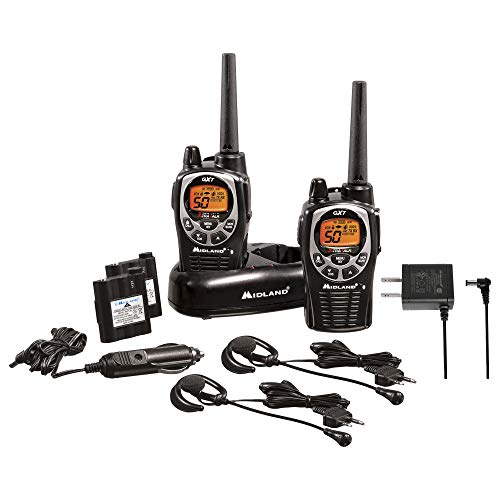 When it comes to sheer power, it’s hard to top the Midland GXT1000VP4. Instead of just 1.5 or 2 watts of transmission power, you get five. High-powered two-ways like this one are better able to overcome trees, walls and other physical obstacles. The fact that the box comes with a pair of professional-looking acoustic earpieces is a nice bonus. Just be sure to stick with the rechargeable batteries included in the kit if optimal clarity is a priority. If you use standard batteries you’ll get better battery performance, but the power output will drop to two watts.

In a nutshell
More wattage equals clearer transmissions and less issues with interference– and that’s where the GXT1000VP4 comes in. It’s a five-watt two-way radio with an impressive 36-mile line-of-sight range in perfect conditions. NOAA alerts, an easy-to-find SOS button and the optional camouflage design option round out its other features. 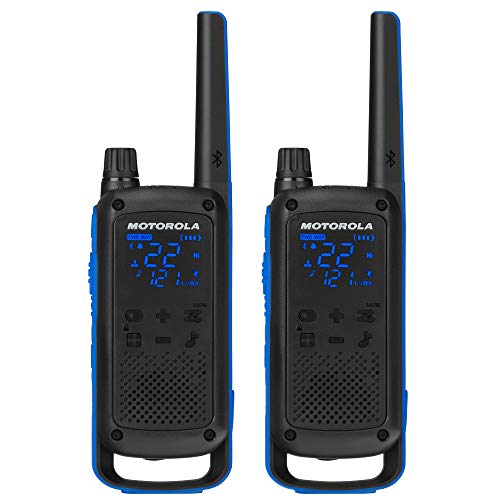 Did you know that two-way radios can send and receive text messages now? We didn’t either until we ran across the Motorola Talkabout T800. You can connect your smartphone to the T800 and use it as a modem to text anyone within a 20-mile radius. Since the data transmission feature runs entirely on Bluetooth, you can use it to communicate in any off-the-grid situation.

In a nutshell
The most interesting thing about the Motorola Talkabout T800 is the fact that it can function like a modem. You can use it to create a Bluetooth data network. Once this is activated, you can use your smartphone to send and receive text messages to anyone within its 20-mile data transmission range. 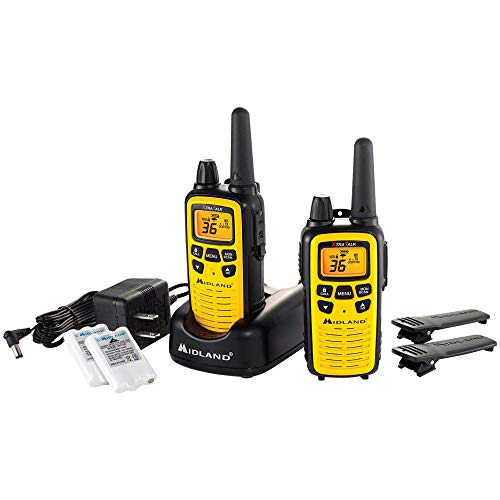 The Midland LXT630VP3’s varied constellation of features makes it an excellent choice for a wide range of applications, from outdoor activities to business use and more. The built-in NOAA alerts will help you stay up to date with the weather, while the private communication feature lets you talk discreetly without sending your transmissions out to the entire group.

In a nutshell
The Midland LXT630VP3 is an affordable jack-of-all-trades two-way radio that has a varied range of features. Since it comes with a charging dock and can be used to communicate over 121 private channels, it can be used as a business two-way radio. Its NOAA features and splash-proof design add to its versatility. 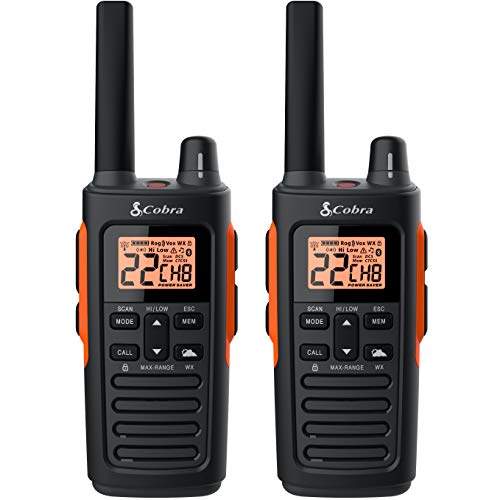 Like an actual cobra, the COBRA RX680 can survive both dusty and watery environments. Hunters might like the silent mode feature, which gives you the option to receive vibration alerts instead of audible alerts when calls are coming in. The built-in flashlight gives you the ability to see in the dark. Its 18-hour battery is another strong benefit.

Tougher than most extended range two-way radios, the COBRA RX680 is resistant to both water and dust. Its convenient built-in flashlight makes it a good choice for camping and other similar outdoor activities. The silent mode feature will prevent you from accidentally alerting your prey on hunting trips. 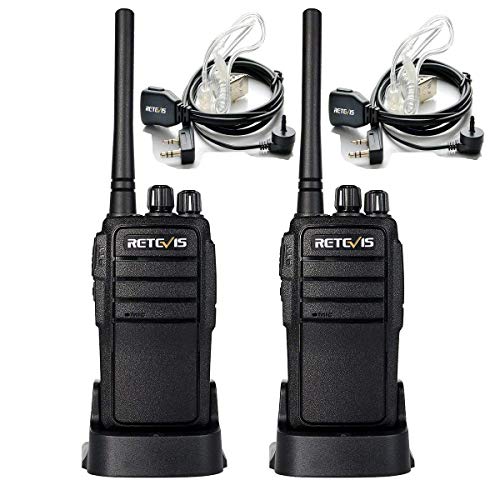 The Retevis RT21 is a sleek, powerful two-way radio that costs much less than what you’d probably assume just by looking at it. Its 2.5-watt rating places it ahead of two-way radios that cost twice as much in terms of raw power. In the box you’ll find cool looking acoustic earpieces (the coiled, transparent kind that Secret Service agents use) to go with each device. The only significant downside is the lack of built-in support for NOAA weather alerts.

If you’re on a budget, the Retevis RT21 might be worth a look. Even though it’s significantly less expensive than its competitors, its two-watt rating gives it above-average range. The programming port lets you quickly set up large numbers of RT21 devices and its detachable antenna is a handy space-saving design.

High-wattage two-way radios outperform low-wattage ones when it comes to penetrating walls and obstacles. However, more power typically means a higher price tag. Five-watt two-way radios are often a lot more expensive compared to two-watt or 1.5-watt ones. The extra cost may be worth it if you intend to use your two-way in a forest, an urban area and other similar environments.

In addition to price, there’s another trade off involving transmission power to consider: battery efficiency. The more power that goes into the transmission signals, the more energy your walkie talkie will consume. To offset this, most high-power two-way radios have a low-power mode. Switching to low-power mode when the people you want to communicate with are nearby can help you squeeze more battery life out of a charge.

Maximum range according to the manufacturer

Two-way radios require a direct path for transmission. Anything that gets in the way– including the curvature of the earth– creates interference. Since the horizon is only three miles away, you probably won’t have much luck sending a two-way radio signal beyond that distance unless you happen to be on a very high mountain in perfect weather conditions.

Channels tend to get crowded when they’re used frequently by a large number of people. If you plan on using two-ways as a communication solution for your business, you may want to go with one that has a high number of private channels. Private channels allow individual nodes on a two-way network to communicate directly without broadcasting to everyone in the group.

A variety of different standards for water and dust resistance exist. The two most common ratings you’ll run into when shopping for two-way radios are IP (Ingress Protection) and JIS (Japanese Industrial Standard). Numerically, both standards use the same scheme for water resistance. In other words, an IPX4 two-way is just as water resistant as a JIS4 two-way. However, IP ratings can also contain information about dust protection– that’s what the first number is for. If this data isn’t available, “X” is used instead.

NOAA stands for National Oceanic and Atmospheric Administration. The US government agency operates weather stations that are located all over the United States. Most US-based two-way radio manufacturers offer built-in support for NOAA stations, but brands that are based in China often do not.

Prices for long-range two-way radios two-packs start at around $50. Their wattage rating is typically low compared to mid-range and high-end two-ways.

At the $75 level, you’ll start seeing two-ways that can output two or more watts. In addition, mid-range tend to have more and better accessories. Acoustic earpieces, belt clips and charging stations are a few of the most common accessories that you can expect to find at this price point.

Two-ways that cost $100 or more are not only more powerful than mid-range and budget two-ways, but also come with better antennas, Bluetooth support and other high-end features.

Q: What are the main components of a standard two-way radio?
A: All two-way radios have transmitters, receivers and antennas. The transmitter is the component that transforms your voice into a signal and sends it out, while the receiver is responsible for transforming the signal back into a series of audible sounds. The antenna is the medium through which the sending and receiving takes place.