Statistics compiled by the law firm Edgar, Snyder and Associates indicate that texting while driving causes about 1.6 million crashes each year. Another way to visualize that troubling statistic is in terms of a ratio. One out of every four crashes involves a driver that failed to pay attention to the road because they were distracted by their smartphone. Some of the crashes are fender benders, but others are far more serious. In 2017, distracted driving resulted in 3,166 deaths.

The easiest way to prevent these kinds of accidents from happening is to turn off your phone every time you get in your car. But let’s be realistic– not everyone is willing or able to make that kind of sacrifice. Some jobs require you to use your phone while you drive. Uber drivers, postal workers and delivery men are constantly on their phones, for example. Bluetooth car speakerphones provide a safer way to use your phone while you’re behind the wheel. Here’s a quick overview of some of the very best Bluetooth car speakerphones you can buy online.

Here are the best bluetooth car speakerphones you can buy: 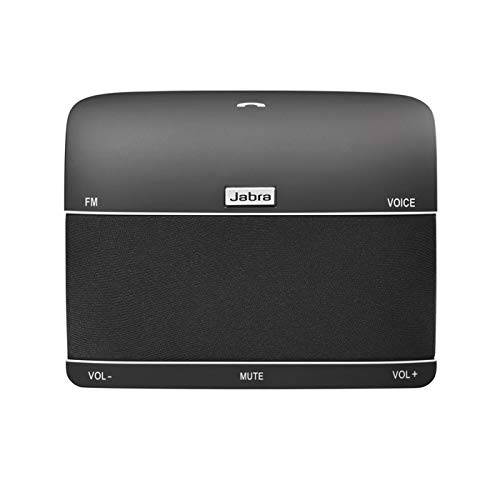 The Jabra Freeway is a cut above the average Bluetooth car speakerphone in the features department. Most competing devices have one or two two-watt speakers, but this one has three three-watt speakers. Moreover, if you prefer to use your car’s speaker system instead, you can use that by sending transmissions via FM broadcasting. Voice assistance and multi-point connectivity round out the rest of the Jabra Freeway’s most notable features.

No other Bluetooth car speakerphone we’ve seen comes close to the Jabra Freeway when it comes to specifications. Instead of a single two-watt speaker, you get three three-watt speakers. Another unique thing about this device is its built-in FM transmitter, which lets you use your car’s stereo system instead of the Freeway’s speakers. It is somewhat expensive, though.

The most user-friendly Bluetooth car speakerphone 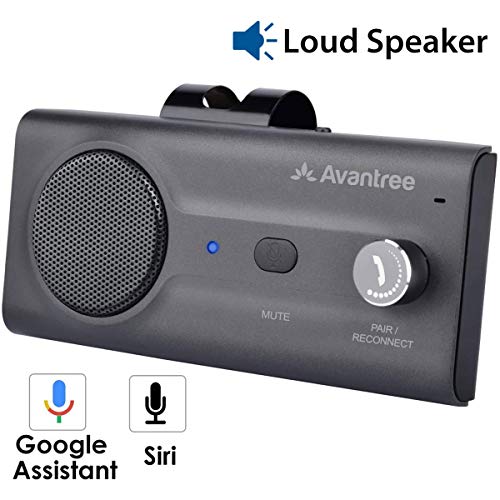 The most unique thing about Avantree’s CK11 is its user-friendly interface. Instead of pressing or holding down a button to change the device’s volume, you just twist a dial. The dial also functions as a Bluetooth pairing button. The only other button you’ll need is the mute button, which is handy because it lets you quickly mute the microphone as needed. The fact that its battery can run for 22 hours continuously is another convenient perk.

The most interesting thing about the Avantree CK11 is its volume control knob, which also functions as a Bluetooth connect button. Most Bluetooth car speakerphones force you to either issue a voice command or press a button when you want to adjust the volume. With the Avantree CK11, you can quickly dial the volume to the appropriate level as needed. 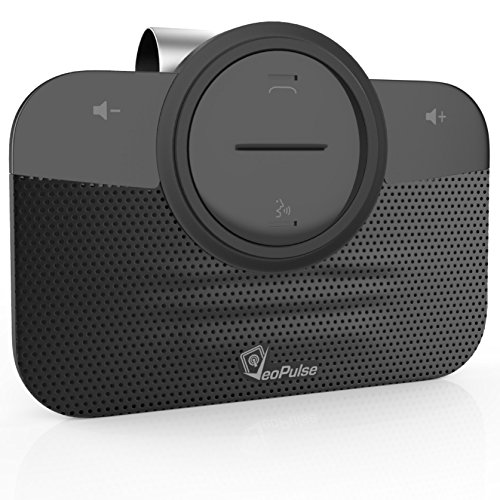 You’ll never need to touch the VeoPulse B-PRO 2B when you use it. A vibration sensor switches it on automatically when you get in the car, and the voice command feature handles the rest of the device’s functions. Compatible with OK Google and Siri, you can use the B-PRO 2B with both Android and iPhone operating systems. Most Bluetooth car speakerphones have these types of features, but VeoPulse seems to have put a special emphasis on making sure that all of its hands-free functions work smoothly.

The VeoPulse B-PRO 2B’s primary focus is hands-free operation. While most Bluetooth car speakerphones offer OK Google and Siri compatibility, dual device connectivity, and automatic activation, VeoPulse seems to have put an emphasis on making sure that these types of features work especially smoothly. Just make sure that you position the device near your face, because the microphone requires this. 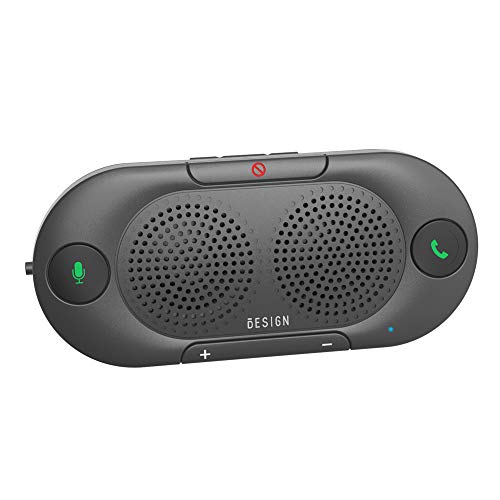 Bluetooth 5.0 represents a significant step up over previous versions of the protocol. Devices like the BK06 that have 5.0-compatible chips have better range and don’t drop signals as often. Another nice thing about the BK06 is that it has two 2-watt speakers. Many Bluetooth car speakerphones only have one 2-watt speaker. The vibration sensor that switches the device on is sometimes too sensitive, but you can disable that if it becomes a problem.

Some Bluetooth car speakerphones cut out frequently. One reason for this could be that their Bluetooth chips are out of date. The latest Bluetooth standard is more efficient and offers greatly improved long-range performance. The Besign BK06 features a Bluetooth 5.0 chip, which takes advantage of all the communication standard’s recent improvements.

The most battery-efficient Bluetooth car speakerphone 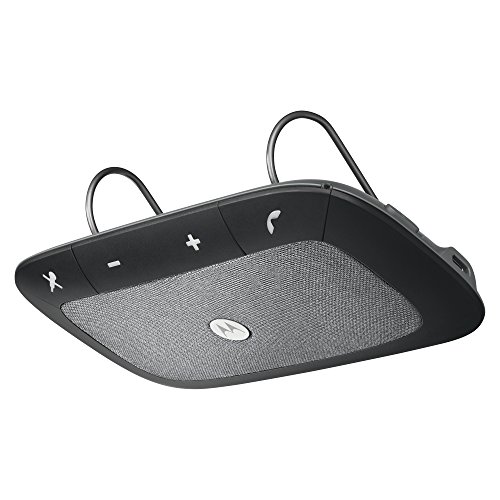 One of the most annoying things about Bluetooth car speakerphones is that they can’t be charged up and used at the same time. If you don’t use your speakerphone device very often, that’s not much of an issue. However, if you are always chatting with your friends as you drive or if your job requires you to make lots of phone calls, battery efficiency could be a priority. That’s where the Motorola Sonic Rider comes in. One charge yields 45 hours of talk time.

The Sonic Rider’s long-lasting battery gives it an edge over competing devices. The industry standard for battery performance appears to be about 20 hours– some brands offer more, others less. With the Sonic Rider, you get 45 hours of continuous use out of a single charge. If you plan on using your speakerphone frequently, this could be the deciding factor.

Standard Bluetooth car speakerphones are equipped with a single microphone, but some have multiple microphones and these tend to be more sensitive. On the other hand, single-microphone devices can sometimes be more precise– but they may not pick up your voice from some angles.

If you’ve experienced technical difficulties using Bluetooth devices in your car, you may want to go with a speakerphone that supports the new Bluetooth standard. Bluetooth 5.0 brings a handful of important updates to the communications protocol, one of the foremost being improved connectivity and range.

For whatever reason, most Bluetooth car speakerphones can’t be charged and used at the same time– that’s why it may be worth it to check and see how much usage you can get out of a charge before you buy. If you only use your phone occasionally when you drive, the number of hours you get out of a charge won’t be a big factor. On the other hand, if you need to access your phone frequently when you’re behind the wheel, battery efficiency may be worth considering.

Multi-point Bluetooth connectivity is another common feature that most modern Bluetooth car speakerphones offer. Devices that support this can connect to two different smartphones and the same time.

If your Bluetooth car speakerphone supports automatic activation, it’ll switch on by itself and connect with your phone as soon as you enter your car. Some devices rely on a vibration sensor to do this, while others use a motion sensor to determine your presence.

Built-in FM transmitter chips are handy because they let you use your car stereo instead of the device’s own speakers. On the other hand, the quality of the signal will vary depending on how much FB interference there is. If you live near a big city, you may have trouble finding a signal-free frequency to use.

Basic Bluetooth car speakerphones cost around $25. At this price range, manufacturers are forced to make sacrifices. Usually that means deciding to go with one speaker instead of two, or choosing cheaper, less efficient rechargeable batteries.

Bluetooth car speakerphones that fall within the $30 to $40 price range have slightly better hardware. You should expect some type of automatic activation feature and a battery that allows for at least 20 hours of continuous usage.

If you’re willing to pay around $75, you’ll be able to get better and more speakers as well as features like FM transmission.

Q: I have a limited cellular data plan. Will my Bluetooth usage count against me?
A: The short answer is: no. Bluetooth is a device-to-device communications protocol that’s totally separate from the internet. However, you will consume data if you use your phone to access data from the internet while you’re connected to your Bluetooth car speakerphone. Calls will not count against your data plan at all, though.

Q: What is the difference between Bluetooth 5.0 and Bluetooth 4.2?
A: Bluetooth devices that support the 5.0 standard consume less energy, support dual audio and feature improved connectivity. Phones started supporting Bluetooth 5.0 back in 2017. If you have an iPhone 8 or later, you can benefit from a Bluetooth 5.0 car speakerphone. Android O-compatible devices can take advantage of the new standard as well.

Q: Will using Bluetooth drain my phone’s batteries?
A: Yes, but the effect on your phone’s battery life will be minimal if it supports Bluetooth 5.0. In addition, the amount of energy you’ll burn depends on how you’re using your Bluetooth connection. Music consumes much more energy than phone calls.